An Easier Way to Win the Race of Business and Life 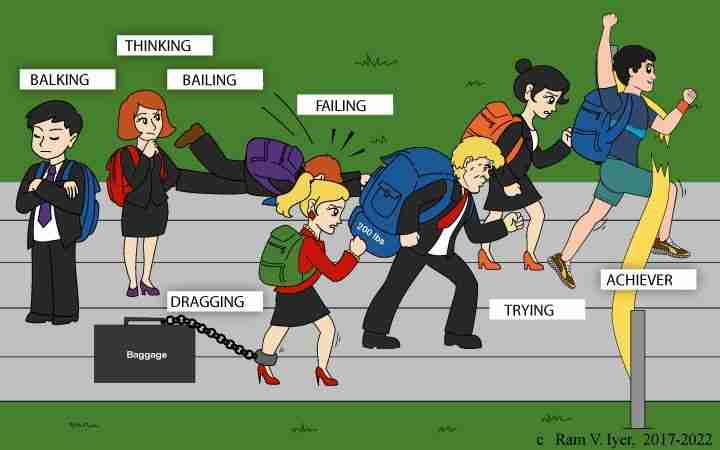 Business and life, in many ways, are like running a race. Everybody is looking to run faster than whoever they consider their competitors. Many people in the race have several issues, some external and others internal. I used ‘inversion thinking’ and found an easier, and often better, way to improve a person’s performance quickly – identify and mitigate (or eliminate) their key disablers.

Consultants, advisors and ‘gurus’ may recommend new running shoes, new shorts, exotic hair gel (usually something they sell)… but most of them overlook (sometimes intentionally) the EXTRA BAGGAGE you carry, or your weaknesses (those may be harder to identify and/or fix; or they don’t want to be the bearer of unpleasant news). They generally make a quick buck and ‘kick the can down the road’. If if you are carrying a 50 lb. backpack, you can’t run very fast, or if you have a sprained ankle, ignoring it will not enable you to run at your normal pace or win the race.

Dumping the backpack (baggage) will instantly enable you to run faster.

Fixing the ankle will take longer, but once you fix it, you’ll be able to run faster.

A person’s performance can be sometimes improved quickly and easily by identifying and mitigating (or eliminating) their key disablers.

I have developed several assessments to identify the disablers in individuals – in business you’re your personal life, because of being considered ‘smart’, and more.

What is holding you back from greater success???