Is Complacency Preventing your Greater Success? 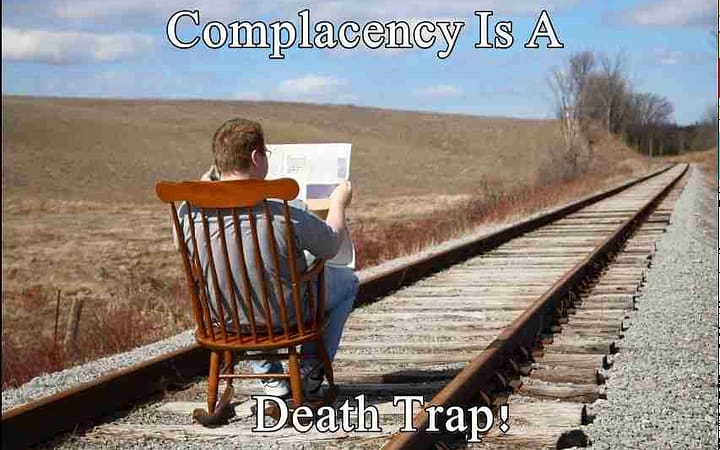 There is a reason why many people succeed ONCE and that’s it – never again. Why is it so hard to succeed again and again and again? Achieving success is hard but succeeding repeatedly is harder because of a human trait called complacency. Often, those who achieve success – land that big customer, make the first million or hundred million or get that big promotion – become complacent. Remember the times you backed off, ‘took your foot off the gas pedal’, slacked off, or goofed off when you ‘achieved’ something? That’s complacency. It is an intrinsic flaw that prevents people from pushing for greater achievement.

Complacency is human.  That happens when we believe that whatever we have at this moment – money, happiness, marital bliss, good grades, happy employees, raving customers, eager suppliers, friendly regulations, etc. – will continue forever.  But, if you use your rational mind, you know that these are temporary.  Your money could be gone next week, you could have something horrific happen in your company or community, your spouse could leave you, your kid could fail an exam, a key employee could quit, you could lose your biggest customer, suppliers could fire you and regulations can change.

But our ‘lazy brain’ acts as if things will be rosy (or bad) forever.  There are three kinds of people – the first group that becomes complacent with success is doomed to precipitous falls; the second group that believe bad times will last forever is doomed to poverty and mediocrity; and the third group of smart ones who use their rational brain to assess their good states and bad states and figure out how to ensure good times last and bad times don’t.

Complacency generally starts out small – postponing action, slacking off, trying less hard and such – and can get uncontrollably big if left uncorrected. You know when you are complacent and it is common sense that you must fight it and act to achieve more.  But, as we know, many people prefer to ignore the obvious and fail to take common sense actions.

Complacency is not a luxury that achievers partake in.

Complacency is like a wild animal.  You can never stop watching out for it as it can strike anybody at any time.  There are only three things I have found to combat complacency – humility, curiosity and an interest to learn.  If you accept you don’t know ‘everything’, are curious about the world around you and are interested in learning, you can never be complacent – at least, not for long!

One way you can avoid complacency is develop an empowering mindset, develop a process for succeeding (repeatedly), and antifragility – to learn from both successes and failures, and become better and more confident each day.

Are you complacent? Find out… click on the link to take a short assessment and find out…

IF YOU ARE AN EMPLOYEE, THINK OF YOURSELF AS A BUSINESS. YOUR COMPETITORS ARE INDIVIDUALS WITHIN YOUR COMPANY (or external people who could take your place)…